This project explores social ecosystems of care in urban environments recognizing public space as a commons. We introduced a set of inclusive commoning design strategies in a public park’s community, facilitated the co-design of an intersectional program of activities, weaving the park’s social fabric and empowering its collective governance.

Participants explored and imagined new forms of inclusive public spaces that enable creative expression. Collectively, a series of activities and events were created including a food festival, basqueerball and an open air cinema. The open-air cinema proposed weekly open-air screenings supporting local directors, activists and artists. Open to all and involving the neighborhood, the cinema transformed the park into a space of co-creation, debate, sharing and living together.

This project has been part of ‘RESpondIng to outbreaks through co-creaTIve sustainable inclusive equality stRatEgies’ project and received funding from the European Union's Horizon 2020 research and innovation programme under grant agreement No 101015990.

An artistic intervention exploration to transform a former parking lot at the seaside of Mar Bella beach in Barcelona. Critical space production focuses on social and environmental regeneration. Rather than using the beautiful seaside as a storage surface for vehicles, our concept proposes alternative ways of using public space and encourages us to reconsider common spaces together. With an unwillingness to accept the status quo, the artistic intervention provokes a sense of urgency and reflection not only on possible future human places but also on the necessity to leave room for non-human species.

This project was comissioned by the Urban Ecology department of the Barcelona City Council. 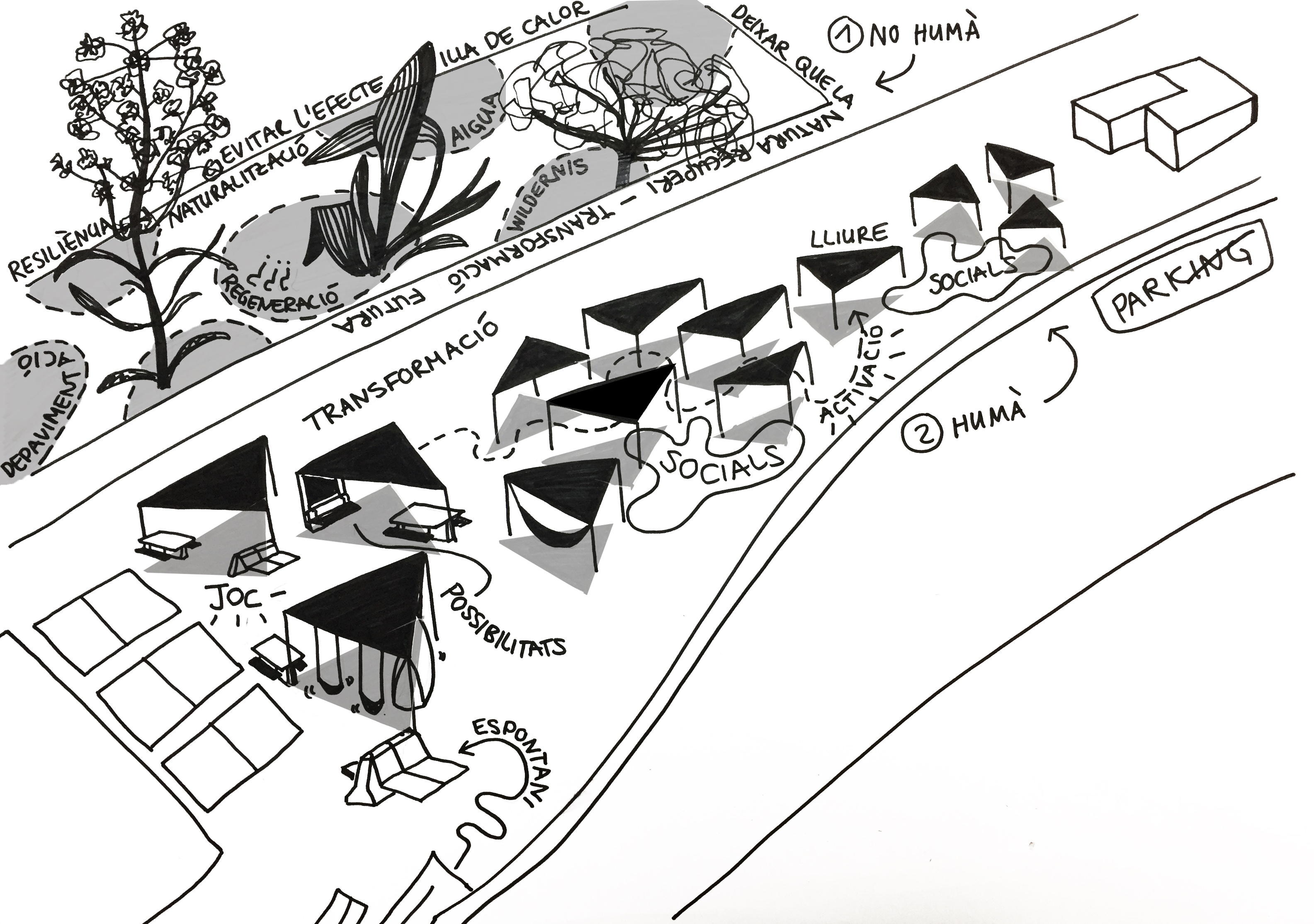 The project which developed participatory design activities to create more inclusive public space. When citizens have the opportunity to participate in placemaking activities, they gain not only greater awareness of their environment, but also a sense of agency over their city. Through a series of workshops, we have been experimenting with diverse methodologies for civic participation while confronting a wide range of participants with topics of gender, functional diversity, cross-generational inclusivity, and sustainability. We facilitated workshops in three different environments, thus reaching a wide range of participants: a public park, a festival and a secondary school. This project aimes to create more liveable, sustainable and inclusive public space together with citizens. Beyond our local impact in the neighborhood, we seek to contribute to a global cultural shift towards increasingly meaningful community engagement.

aquí collaborated with a secondary school to engage students from an urban diagnostic to co-creation. After identifying and prioritizing challenges, the students designed concept ideas to address these, and teamed up to propose a collective vision of their local plaza.

This project has received funding from the European Union’s Horizon 2020 research and innovation programme under the Cross-KIC New European Bauhaus Call for Citizen Engagement.

aquí has developed an award-winning methodology for participatory design of public space, involving citizens throughout the process. Genuine community engagement generates collective agency: people are given the tools to challenge their reality and reimagine their environment. Social innovation activities have included crowdsourcing citizen’s ideas to fight air pollution, or facilitating a bike-lane design workshop.

In conversation with Barcelona City Council and the local neighbors’ association, aquí initiated a participatory design process for c/ Sancho de Ávila, in the neighborhood of Poblenou. It involved several ideation and co-creation workshops, followed by prototyping and urban acupuncture interventions. We designed and built modular urban furniture made of recycled materials together with the neighbors.